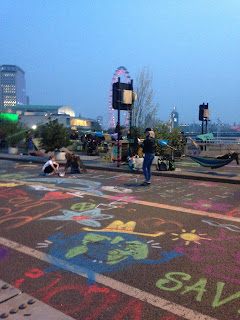 
Does anyone recall the distant thrill of hope?
The cries of the city echo the spill of hope.

It is all too easy to slip from the tightrope;
another bottle dropped on the landfill of hope.

A politician lies, spews out the same old trope.
Only the most selfish can boast the skill of hope.

Comforts and futures clash in a kaleidoscope
full of hypocrisies — a crass windmill of hope.

Everybody dances when they run out of rope
so march with all the marchers up the hill of hope.

I thank the Lord that I was born a misanthrope —
humanity always adapts to kill off hope.

I have nothing new son, no other way to cope;
listen to the birdsong, pretend there's still some hope.

John has a wide variety of interests, ranging from architecture to zoology, and a corresponding inability to focus on any single task. He writes to achieve such focus.
Posted by Martin at 13:00