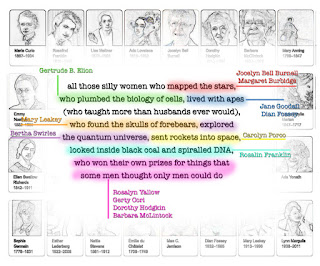 So, as ever, she slipped through too bulky seat belts,
or, beneath the steering column, improperly restrained,
she crashed the dashboard, went through the windscreen,
unprotected by the crumple zones, far more like to die.

And there were never any dummies for the woman
in the passenger seat, in her women’s place;
because no man was ever curious enough to see
the difference she made by being there.

It always was the men, techie boys and nerds,
caught up in data, algorithms, routines,
who programmed everything with a blokey mind,
who omitted the question of a feminine side,
who avoided the distaff, the brain’s right side,
and suppressed rising anima with their animus,
not out of animosity, you understand,
but filtered out by astigmatic ignorance.

It’s a man’s world, a world of patriarchs, the patriarch,
for all his empathy (and then not much) is heard to say,
who designed the bridges, the cars that cross them,
this electric world, its lights and wires, our industry,
its phones and planes and automatic doors?

He implies: it’s chaps like me, and he ignores
all those silly women who mapped the stars,
who plumbed the biology of cells, lived with apes
(who taught more than husbands ever would),
who found the skulls of forebears, explored
the quantum universe, sent rockets into space,
looked inside black coal and spiralled DNA,
who won their own prizes for things that
some men thought only men could do.

And so there it is:
the yawning gap in our assumptions,
a chasm, where the wisdom and prowess
of half the world is disregarded,
left out of the reckoning, just because
half the world condemns the rest to seem
more useless than itself.

Brian Hill. 50 years a poet. One-time designer and film-maker; long ago, the rhyme-slinger, cartoon cowboy, and planetarium poet; now feverishly stringing words together in the hope of making sense.
Blogs as Scumdadio (don’t ask) at: http://onepieceaweek.blogspot.co.uk
Posted by Martin at 17:30