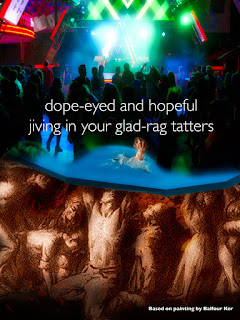 A kind of curfew locks you into mean streets
that run, sallow-lit under neon, beneath citadels
where the elegant gather in glamour-crowded corridors.

In your poor dormitory town, sodium light flickers;
one streetlamp in three, stubborn in the darkness,
fails to shine any light at all.

Oh yes, you have bawdy-houses, dives and night-spots
where iniquity trades its cheap perfume and pallid guilt;
but the dispossessed are already banished, leaving you,
dope-eyed and hopeful, jiving in your glad-rag tatters.

It took a pretty penny, took a mountain range of them,
to build this glass-elevator world where every level
shimmers brighter than the last, as if nothing
could ever stop you and all the other whirling millions,
from rising up in exultant revolution,
raptured from the common, cobbling roads
you call your home.

Step up to the plate-glass ceiling, meet ambition’s boundary;
do not, for an instant, think that sky goes all the way,
well, not for you; what you see is for imitation alone,
for you to approximate but never experience, for you are
blinded by the glory dazzling in your eyes.

Your species scuttle beneath cities where time ticks
at a different rate, where reward is greater than punishment,
where incentive hangs its carrot-face to spur achievement,
and the fasces’ bundled sticks are never seen to beat.

Those doors are locked, shut by your own hands
or others as calloused as your own; no sign of keys or latches,
nor deadbolts, nor chains, but still the cuffs chafe upon your wrists;
be sure that nothing you could ever do will make you free.

The few are chosen, most often by an already chosen few;
the many are only the mass from which effort is extorted,
from which some randoms rise pour encourager les autres
where only enough is done to make subjugation feel less raw
where slavery comes with benefits but is slavery all the same.

Review: ‘Twilight of the Elites’ Looks at a France, and a World

Brian Hill. 50 years a poet. One-time designer and film-maker; long ago, the rhyme-slinger, cartoon cowboy, and planetarium poet; now feverishly stringing words together in the hope of making sense.
Blogs as Scumdadio (don’t ask) at: http://onepieceaweek.blogspot.co.uk
Posted by Poetry24 at 23:30