That Was the MUSE That Was 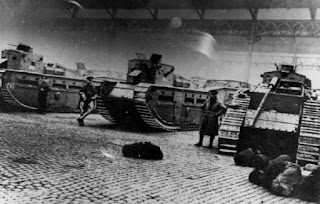 Workin fowk, men efter seein the worst o war, women an bairns,
protestin a fair pairt for aa, gaithered there tae state their claim,
till the sodjers came, nane fae the Maryhill barrack but fae ootbye,
an some fae ower the border, files the polis, at the crowd’s back,
cracked heids, an got Shinwell lifted alang wi Gallacher and Kirkwood.

Then, efter Bliddy Friday it was pit awa, though a war poet
came at the hinner en tae be defeated by the rain.

Noo, efter a hunner year,
it’s mair haar nor memory, hardly worth a haunfae lines in the papers,
wi some saying it could nivver happen theday; but they have nae idea –
nae idea hou far them wi power maun gang tae keep a hauds o’t.

A century since,
hidden tanks just off Glasgow’s streets, out of sight,
in an unlit building, engines idling in the Cattle Market,
skulking tin beasts that never won the length of George Square:
a gesture, maybe, for a jolt of fear at the heart of government.

Working folk, men who had seen the worst of war, women and children,
demanding a fair deal for everyone, gathered there to state their claim;
till the soldiers came, none from Maryhill barracks, but from elsewhere,
and some from over the border, while the police, at the crowd’s back
cracked heads, and got Shinwell lifted along with Gallacher and Kirkwood.

Then, after Bloody Friday, it was put to rest, though a war poet
came at the tail end to be defeated by the rain.

Now, after a hundred years,
it’s more fog than memory; barely worth a handful of lines in the news;
with some saying it could never happen today; but they have no idea –
no idea how far those with power must go to keep their hold on it.

100 years on: the day they read the Riot Act as chaos engulfed Glasgow

Brian Hill. 50 years a poet. One-time designer and film-maker; long ago, the rhyme-slinger, cartoon cowboy, and planetarium poet; now feverishly stringing words together in the hope of making sense.
Blogs as Scumdadio (don’t ask) at: http://onepieceaweek.blogspot.co.uk
Posted by Martin at 23:30