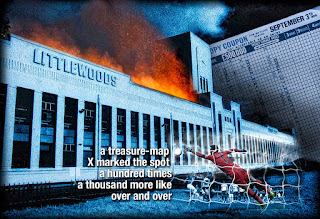 It was one-all in our winter house
when the first frosts came back
and my father, alone by the fireplace,
filed in his pools, his vigorous pen,
putting crosses on the lines.

…no more with crans of herring
destined for the factory gates
where he tipped his hat:
a wink to the drivers passing,
an obligement for the fish-women
going in turbaned behind.

His hopes were a treasure-map;
X marked the spot a hundred times,
a thousand, more like, over and over,
and he sent them, stamped and sealed,
into this wheeling game of fortune.

All of it was guesswork;
my father followed no team
I knew of, never stood on a terrace
to cheer the play on any pitch
yet he tried to predict the scores,
draws and wins for the promise
of an easier life, for riches
beyond his weekly wage.

It was a dream; he never won;
like all dreams, it fizzled out
in the way time has to dwindle them
and send them up the lum, up in smoke.

And now the whole place has burned,
that hallowed palace where bets paid out,
when your number was up, but in a good way;
as if fortunes, decided in the heat of moments,
had spontaneously combusted in the night
and burned away to nothing but pools of light.

Perhaps my father’s ghost had come back
to take this sweet revenge beyond the grave;
he too, burned and scattered as he was,
might have wanted to rekindle lost fortunes
for all the lonely punters like himself
who marked out their tomorrows
like knitting patterns or the fates
weaving something better
from the thin strands of today,
from whatever tedious lives
they were tangled in.

Brian Hill. 50 years a poet. One-time designer and film-maker; long ago, the rhyme-slinger, cartoon cowboy, and planetarium poet; now feverishly stringing words together in the hope of making sense.
Brian blogs as Scumdadio (don’t ask).
Posted by Martin at 23:30