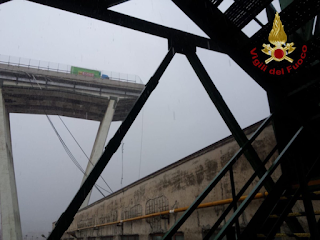 A Basko supermarket lorry is stood

on the brink of the drop

where the bridge fell away.

The wheels were due to cross to that section,

The driver thought the roar was thunder

or a bomb blast

and through his rain-swashed windscreen

saw the lorries and cars in front

He stamped his foot on the pedal

hauling on his hand brake.

Was he listening to latest hits on the radio,

that excitable Italian patter between songs?

Was he talking on a hands-free

or following his sat-nav for the next delivery?

The lorry is stationary

from the broken edge.

He didn’t turn it round,

thinking the rest of the bridge

must be about to go down too,

So he stepped out of the cab

and walked back along the highway

wondering at every step if that would collapse

but better to run back

than risk reversing his employer’s vehicle

We are all that driver

poised on a drop

to a broken world

as I am today

wondering what may be about to happen

if the test results have been analysed

and what the consequences will be.

My lorry is stationary

from a broken edge.

Rebecca Gethin lives on Dartmoor in Devon. In 2017 two pamphlets were published: A Sprig of Rowan by Three Drops Press and All the Time in the World by Cinnamon Press who published an earlier collection and two novels. She has been a Hawthornden Fellow. In 2018 she jointly won the Coast to Coast Pamphlet competition and has been awarded a writing residency at Brisons Veor. www.rebeccagethin.wordpress.com
Posted by Martin at 23:30