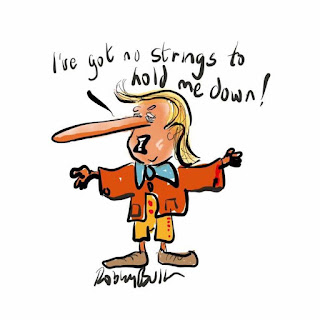 Note: 'Swallow' first appeared in I am not a silent poet and appears here by kind permission. (Ed)

Peter A Kelly sometimes draws or photographs but usually writes instead. Occasionally published, one poetry prize, but best rewarded when his work affects others.

Jenni Wyn Hyatt was born in Wales in 1942. She now lives in Derbyshire, and started writing poetry in her late sixties. Jenni published her first collection, 'Perhaps One Day' in 2017.

New law
dictates that blondes have more fun:
redheads, brunettes and mousey brown
there’s nowhere to run
'cos the boys are back in town

Bex Tate, frustrated with the data driven education system, recently left behind her job as a Kindergarten teacher to spend time writing and pondering life. Writing poetry helps her to try and make sense of the world...as well as giving her the chance to rant a bit!!

A President’s Lot Is Not A Happy One!

When the President’s enduring a State visit
Or maturing his fascistic little plan (little plan)
His capacity for humour is diminished (is diminished)
He’ll sulk, and skulk, and whinge like any man (any man

The lying media’s making up more stories
Though he’s building walls and keeping hombres out
now Brits are floating b'lloons with him in diapers
A stoopid hairdo and a massive pout.

He has to take the hand of their old PM
(Those fancy dinners leave him feeling bad)
She’s still after a trade deal with her Brexit
But Had to say 'Theresa you've been had!'

It’s hard to think he ever stood for this
He’s doing all they voted for, and extra
Yet all they ever do is take the piss

But a President’s life is no such happy one. (happy one)
OH A PRESIDENT’S LOT IS NOT A HAPPY ONE. (HAPPY ONE)

Latest on Trump's Visit to the UK

Trump went to dinner with May
His hair got out of the car before he did;
I'm not sure any dignitary's tresses
Have been discussed
As much as Trump's is
(Asides from a certain Korean chap).

He's avoiding certain parts of Britain;
Mainly areas with protesters
And some bloke with a placard to free
Tommy Robinson.
He will be attending Windsor Castle
But may avoid Buckingham-
Trumpety, Trump, Trump.

Donald Trump arrived for dinner with Theresa May, and his hair got out of the car before he did

Amanda Derry joined a Creative Writing class, following a breakdown, which played a significant role in her recovery. She now embeds literacy skills into classes that she teaches. Amanda also runs the Facebook Group, I Love Writing.

The general consensus seems to be
that the Brits dislike Donald Trump.
They think he is as rude as can be,
that he's not a chum but a chump.

Across the country men will protest,
(though many say the gesture is limp)
and acting more in earnest than jest,
they'll fly a twenty-foot-tall baby blimp.

As he expressed admiration for Boris
saying that he would be a good PM
his opponents criticised him in chorus
and jeered him for uttering this 'gem'.

He claims that the Brits like him a lot
yet many thousand say he is a jerk.
He thinks the EU are hatching a plot
and a deal with them will not work.

To be contentious for him is the norm;
he says things at which people scoff
and he flies into a diplomatic storm
when he declares that a US deal is off.

Donald Trump UK visit: President meets the Queen after declaring post-Brexit trade deal back on thanks to 'higher level of special relationship'

Luigi Pagano has published three collections of poems: ‘Idle Thoughts’, ’Reflections’ and ‘Poetry On Tap’. His work has been featured in ABCTales’ magazines, UKAuthors’ anthologies, Poetry24 and several other publications.
Posted by Martin at 08:00