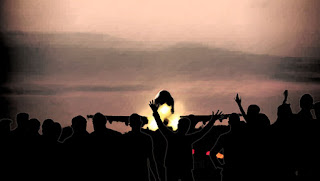 I stood on the cold tarmac.

For common humanity,
I stood on a bleak runway
where charter planes roar and lift
into a heaven so blue that no-one
can believe the brutality of their flight.

I only stood to bear witness
as people, secret and guarded,
flew in transit to anywhere but here.

Deportees, unnamed and faceless, slipped
into faceless night, lost above the scattered nimbus
of an English evening with an anonymous dusk falling.

I could not bear the way we break ties of love or kin
to keep laws written for judges in cynical chambers.

I only stood on that cold tarmac to say ‘enough’,
for decency to prevail over sleight and shadow
and I saw those unwanted people scathingly
denied all human comfort for their going.

They are leaving, unwanted, according to rules
we made, rules we revise daily, all statutes
being mutable and subject to change.

I stood on the cold tarmac only to find the same law
take me as a terrorist, simply for standing there,
me, a terrorist, in the way of political convenience.

I was amongst others who believed in safe havens
for the persecuted, who believed we should
abandon no-one just to make up the numbers.

And those whose grim compassion is ash and cinder,
who name themselves righteous despite the terror
they inflict, will be my judge and jury.

Because I stood there, at the going down of the sun,
the law, once more an ass, would send me down;
knowing, as it does, neither love nor wisdom.

Brian Hill. 50 years a poet. One-time designer and film-maker; long ago, the rhyme-slinger, cartoon cowboy, and planetarium poet; now feverishly stringing words together in the hope of making sense.
Brian blogs as Scumdadio (don’t ask).
Posted by Martin at 08:00