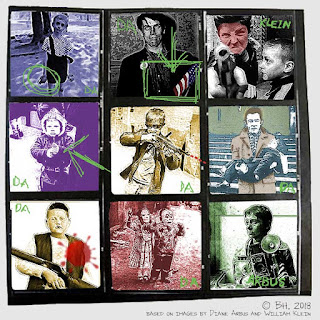 You still don’t understand the feeling, this churning in the gut,

as if you’re the one caught in the assassin’s cross-hair,
as if your drawn bead is marking out someone else to die.

Is it revenge, this roulette? Russian, American? Who cares?

In the tumbling game of chance your last inevitable marble runs:
black for win, red for lose; death or blood, there’s little difference
when the wheel’s in spin; just cup your hands and blow,
warm these rolling dice for your crap-game gamble;
but you were hiding in some dead-end, pitch-black alley
while the bones were loaded; not knowing who drilled the spots;
not knowing who filled their hollow eyes with lead;
not knowing who was cheating who.

The war inside you has finally broken out and the sun
is far too bright for it to be just any day; still,
it’s a day, a good day to be weaponised.

This ringing in your head (don’t ask, is it just for you?) comes down
like the one last chime of freedom, the sound of the soul cut loose,
triggering every alarm in Heaven, where you will never go now.

You tell yourself, it’s only anger, not madness, something stirring
in your blood, unease, disease, adrenaline pumping up your heart.

It’s not knowing who you are and knowing who everyone else must be
it’s believing what you believe and, for all the differences in the world,
it’s all that’s left here on the outside where you’re in exile
even though you don’t belong, you don’t belong at all.

Be careful what you carry: the man is wise and you are just a boy,
alone, normal on the street, walking like normal through gates and doors,
acting as if nothing could be so wrong, acting as if the cold sweat on your back
is imagined, and your glistening upper lip is not a dead giveaway.

Did you even think about it as your right to bear arms? Not once.
Still, you bring them to bear, swivel them into the whole world’s face?

It was all too easy, and natural, in your view, such as it is,
as you peer through the scopes for sense, for targets,
for some way to see, some way to recognise the ones to blame.

But that’s not your call: too confused, too many words to take in,
too many slogans, too much TV-talk, yadda-yadda-yadda;
now their faces look back at you in stupid surprise,
you never expected that at kill or die time,
but you’ll take them down all the same,
take them all down with you, if only you knew where…

The Boys Are Not All Right