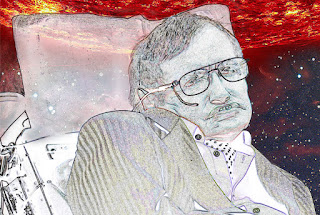 Our great mind has gone

But no-one knows precisely where:
If he has risen into a heaven
Whose intricacies he understood
Or else simply scattered
His human debris, like cosmic confetti,
A handful of brief atoms returning
To the hearts of future suns.

So he has gone, leaving us with remnants
Of his deep thought, having considered,
More than most, the actual where of going.

Mind over matter, they said, was his attribute:
The supremacy of intellect over substance.

Yet he was one who taught us how
Apparent opposites may be bound together
Like eclipsing binaries dancing, unfathomable,
In a reel of darkness and light beyond
Our momentary here, somewhere
Inexplicable and inexact.

Life, for him, was a thought experiment, as if,
After all, practical experience was another distortion
Of space-time, another gravity-well in the continuum,
Our quantum prison.

I suspect he knew that even the black hole
Inside each human heart decays in a haze
Of sparks and quarks and bosons.

I suspect he was waiting, in his inimitable way,
For time to catch up, for just one more spin,
For the door into tomorrow to swing shut,
As it inevitably would.

He once said that we exist through imperfection,
Being aware, in his wisdom, that cancelled matter,
The dark and the light, with their equivalent energies
Cancelled in turn, leave an imperceptible residue.

He understood, laughing as if it were a cosmic joke,
How we are made from the shreds of a left over universe:
Pieces of jigsaw time in a randomised puzzle
For our impossible intelligence to solve.

And he did not tell us about the state of being gone;
Which, among all the states of energy and matter,
May not even exist or it may be a precedent where-ness,
Spinning, opposite and contrary to the heat-death
Of the receding stars waiting for the universe to be reborn,
For it to become something else, somewhere else,
Remade by a different beginning.

Brian Hill. 50 years a poet. One-time designer and film-maker; long ago, the rhyme-slinger, cartoon cowboy, and planetarium poet; now feverishly stringing words together in the hope of making sense.