The blind sculptor who thinks everyone should touch art


It was a masterpiece which remained
out of bounds Do not touch even
if blind, even if a sculptor yourself


so friends described it, measured it, modelled it
for the blind sculptor so that its form imprinted.
He’s able to carve his own re-creation.


Imagination enables him to hold in his mind
the memory of a form of beauty
the ridge and fold, the crease of it


blown silks of stone rippling across a veiled
head turned aside to the right, arms trailing
swathed as if with weeds by flowing water


feet pointing up, webbed with a fine gauze,
the swirl of drapery revealing only gradually
the secret of the recumbent figure


the instruments of torture
pliers, a discarded crown of crumpled thorns -
for this was a dead Christ. But touch this one:


it makes the blind see and unlocks revelation
even for the sighted, whose hesitant fingers begin
the work of translating an entirely foreign language.
© Sue Norton

The blind sculptor who thinks everyone should touch art 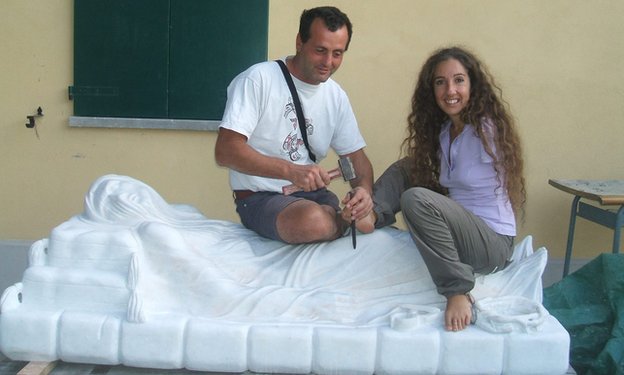