"If Jesus Christ was alive today, I cannot see him,
as the great person that he was, saying this could not happen.
He was all about love, compassion and forgiveness and trying
to bring people together and that is what the church should be about."
All these rules preventing gay clergy from marrying, requiring that
Catholic priests be celibate, these are “old and stupid things.”
So says Sir Elton. Everyone has their own ideas about what Jesus
would do and say today. The most religious always assume he is
on their side, though it was priests and leaders who got him crucified .
My hunch is, that if there is a Judgement Day, he won’t say
that keeping the rules was unimportant, but they were just
pointers to the greater good: that true love always leads to
an expansion of the heart; heaven rejoices, letting in all
the unsuitable, who knew they were undeserving.  Maybe
God’s kingdom of generosity is hell for the righteous soul.
© Sue Norton 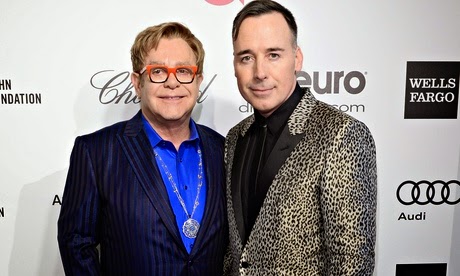 http://www.independent.co.uk/news/people/sir-elton-john-says-jesus-would-support-gay-marriage-he-was-all-about-love-9571113.html
Sue lives and writes in York
Posted by Martin at 08:00