My aunt was named Shirley, after
The Little Princess, America’s darling,
and both wore tight, adorable, ringlet curls.
I doubt Shirley Temple’s curls were set in rags,
like my grandmother Annie set my aunt’s hair
while it was still wet from washing.
This was during the 1930s.
Aunt Shirley died five years ago, and
Shirley Temple Black died today.
Besides the curls,
I doubt these Shirleys
had much else in common,
although both were charming to a fault.
When my aunt died, I grieved for her,
My last living link to a mother,
who died when I was 12.
So I grieved again for my mother,
and grieved for myself, and for all those
I’d watched died, and buried ever since.
Heart-rending grief takes its toll.
From this deep, resonating place
I decided it was time to stop.
Time to look up, time to move onward.
©Melinda Rizzo 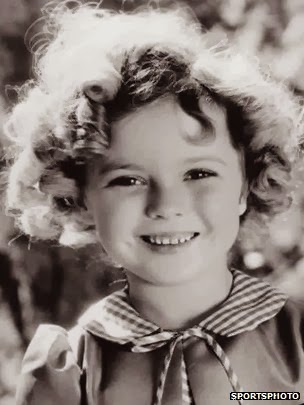 Melinda Rizzo lives and works as a freelance reporter and writer in Quakertown, Bucks County Pennsylvania USA.The child of older parents who have both died, she grew up watching old black and white Shirley Temple movies. She lives with a teenaged son, her husband of 35 years, and a black Labrador named Caleb in an old, drafty, lovingly restored farmhouse.
Posted by Martin at 07:30