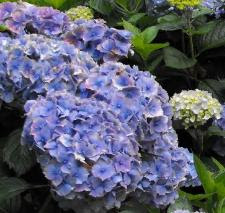 Her hydrangea overhangs his garden,
blocks the sun from his tomato plants.
So he prunes the offending shrub and she
is enraged, calls him a menace—
amongst other, unmentionable things.
She is 87 years old, like Mildred,
who, when I urge her to do
the prescribed voice exercises,
tells me to fuck off, but doesn’t mean it.
Saturday afternoon with Mildred,
Ms. Hydrangea’s story crops up
on public radio news trivia. The incident
made national news in Britain. The neighbors
say they are fed up with the shrubbery
of ill-mannered pensioners
barging big, old-fashioned, blue heads
into other people's gardens, stealing
the very sunlight. Surely, they say,
those hydrangeas had it coming.