When I look at you 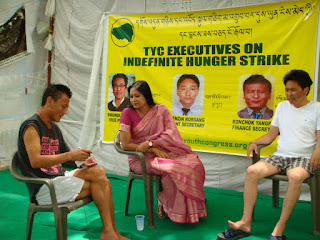 (The poem is dedicated to the braveheart hunger strikers of Tibet who went without food for 25 days in May 2011 and for seven days in October 2011 in protest against the Chinese illegitimate occupation of Tibet that was forcing young monks to self-immolate themselves. There have been 18 cases of monks setting themselves on fire and dying because the chinese rule does not allow them the freedom to practice their religion)

When I look at you
I see men amongst people
heroes amongst men
saviours amongst heroes
I see brave hearts, I see hope
I see a dream coming back to life.

The Tsangpo is sweet by your promise
the mountains sturdy by your resolve
you are the coral of Tibet’s ruddy winds
the precious turquoise of its soil
the force of its snowy gales...
the balm on the lesions of torn people
You are doves of peace
bringing rest to a scattered million hearts
When I look at you - this is what I see.