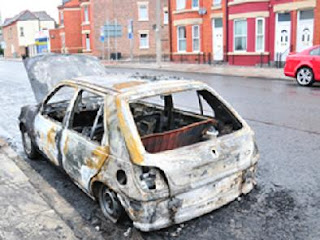 for the unrest: ‘recreational rioting’?

still shell-shocked in the shell of his shop;

the hoody has new trainers but his mum’s

too scared to ask him where he got them;

a dad catches sight of his pride and joy

on cctv and has to make a choice.

with more staff cuts, and won’t lose any sleep;

Police officers who held back after all

the complaints, now vilified for holding back,

not holding back the mob; some stoic Sikhs

for smash of glass or curl of smoke;

insurers calculate the costs to spread

to everyone: the flat-dwellers who fled

with nothing but their lives; the family firm

Sharing camera footage of him

and his mates and what they did,

with the chirpings of disturbed birds

in their silver cages and their nests of rags;

police drafted in and dying for a tussle;

the brush and bucket brigade

and the same questions bubble up

at office water coolers, in government

and forums and behind closed doors:

What happened? And why?

Are you alright? Were you insured?

Where can we go? How can we protect?

What should we do? Who did this? When

and where will they strike again?

Where were you last night?

Clare Kirwan occasionally wears a hooded top but has never broken any windows she didn't own. She performs poetry around Merseyside and blogs as Broken Biro.

Clare says: There are so many articles on this, but I chose one local to me - I wonder how many more disturbances there have been away from city centres and not reported nationally?