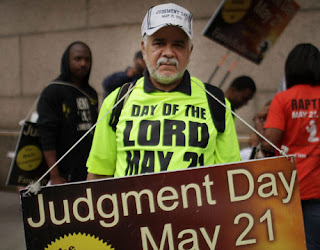 I was at my computer on Judgment Day.
The billboards and the fliers have proclaimed
the good news, and the Jehovah's Witness
down the street disagrees, almost gambling
on December 12, 2012, making my mom worry
that the poor Mayas and Chinese will look bad
though she doesn't mind the Protestant getting it
wrong: he's been collecting money.
And who needs money in Heaven

or hell? The night before the Judgment day was hot
and the morning of was cold, so maybe it is
Judgment Day. Maybe I didn't know
I woke up

the day after with all the other Catholics, Jews,
Muslims, Buddhists, Sikhs, Hindus,
Zoroastrians, agnostics, atheists and whatnots, eating,
sleeping, working, cashing unemployment
checks, sitting in front of the TV, going
to church, having sex, abstaining, killing
Taliban, paying for manicures, opening soup cans
for green bean casserole, skipping
the news articles about civilians getting shot, waiting
through the earthquakes and storms of the next five months
for the tree to fall in the forest,

which, of course, none of us will
hear because we're husks,
and sound isn't sound unless we're there
and earth isn't earth unless we can conceive
it, and time ceases
to be time if we can't count it, and God,
the mystery, is a cloud on a desert,
where there isn't a tree

to fall against an eardrum anywhere.


Judgment Day May 21: When will the world actually end?